Magnetrons are widely used as RF power sources because they offer high energy conversion efficiency (around 75%) at a low cost. The magnetron was invented during World War II, when its small size, high power and short wavelength made it ideal for use in radar, but with mass production and the development of automatic manufacturing techniques, magnetrons made the move into the home as the radiation source in microwave ovens.

Several important characteristics of this type of RF source: 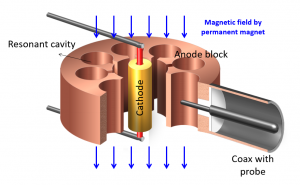 In the core of the magnetron is a hot cathode with an emissive surface. The Anode block surrounds the cathode and has a form of cylindric cavity. In one of these cavities, there is a mechanism to extract the electromagnetic signal out of the cavity and into the transmission line structure. A couple of strong permanent magnet is used to create a strong magnetic field (it can be 0.2 Tesla in comparison to the 3 Tesla one can find in MRI scanner) across the electrode structure.

It starts with the electron being projectile from the surface of the hot cathode due to the thermal agitation and by the electric field created by the tension between cathode and anode. Because of the permanent strong magnetic field, the electrons undergo Lorentz force and move in a curved trajectory instead of going radially from cathode to anode (figure 3a).

The electron beam and the cavity structure at first creates a moving electron beam with arbitrary ray (or phase in the language of electromagnetic wave) but because of the interaction between them, eventually, only some manner of electron moving is maintained and reinforced by the structure, the arbitrary moving manner eventually vanishes. The electrons move in a synchronized way. The magnetron passes from the transient state to the steady state.  We talk about the “resonance mode” with the frequency determined by the cavity structure.

At the steady state, there is a “space charge wheel” formed by electrons mass that oscillate at the resonance frequency. These time-varying moving electrons creates radiofrequency electromagnetic field inside each cavity. A simple coupling (loop antenna) help guide the electromagnetic wave to exterior of cavity. In the case of a microwave oven, a waveguide is often used to guide the wave to the microwave compartment. 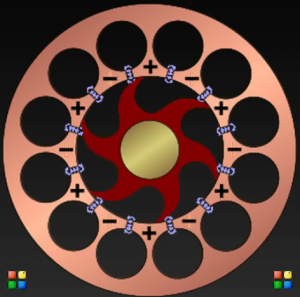 Fig. 4 A space charge wheel (of electrons) is formed at the steady state.

Fig. 5 Animation of electron beam forming inside the magnetron

A simple parametric simulation in HFSS give a result quite nice. We get -30 dB return loss (thus 99.9% energy pass through the transition structure) at the frequency of interest.

In this article, the structure and the operation principle of magnetron has been presented. By using a hot emissive cathode, the magnetron creates an electron beam. The electrons move around the cathode in circular manner because of the permanent magnetic field and this displacement is modulated at the frequency determined by the cavity structure (an LC circuit). At the end, the time varying moving electrons creates the strong electromagnetic field.